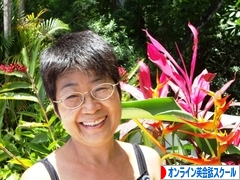 Lessons with Hisano unlocked the key to my communication in English, which allowed me to attend and graduate from a four-year college and become a manager in a company in California.

Hisano is without a doubt one of the most influential people in my life. She was a life coach for many years and taught me English as well in my teenage years. At the time, I was in California as a language student. Even though English was a requirement in my middle and high school, I was struggling a lot trying to understand what native speakers were saying. I could not even hear the distinction from a word to another. Pronunciation was drastically different from what my Japanese teachers taught me. Hisano, then, offered a helping hand. She took time with me to show exactly how each alphabet sounded. This is a unique challenge for Japanese speakers when learning English. In Japanese, we only have about 500 distinct sounds. But in English, there are thousands of separate, unique sounds. This means there are nuances that Japanese speakers aren't even aware of. Hisano had the ability to not only show me how to make each sound but also able to explain how similar sounds differ from each other. I remember her repeating the sound "a" and "o." In Japanese, they are both pronounced the same. But in English, they are very different. Being able to recognize this difference was one of my first steps to understanding native English speakers. In fact, lessons with Hisano unlocked the key to my communication in English. This, later on, allowed me to attend and graduate from a four-year college and being a manager at a factory in California.

I now live in Canada as a mother of two with a loving husband. I live a comfortable and fulfilling life and often consider myself a success, which I measure by my happy feelings I get to experience on a daily basis. I don't, however, attribute my success only to myself. I know that my achievement in life came from the choices I made at a dividing point when I was a teenager. This is also where Hisano came in as my life coach. This role she took was much bigger than being an English teacher. I think she was originally hired by my mom to watch over me while I stayed overseas by myself. Hisano, though, quickly became someone irreplaceable. The idea of hiring a life coach for a teenage girl might not be a common practice. But this was a lifesaver for my relationship with my mother. At the time, I was in a long struggle with rebelling her. I knew deep down that she was probably the most important figure in my life, but I didn't know how to stop myself from being reproachable. Talking things through with Hisano gained a perspective as if I became someone outside of my family. This eventually allowed me to look at my relationship with my mom, and who she was, with clarity. With weekly coaching and Hisano's support, my mom and I became closer and closer, until one night, we were holding each other's arms in front of our fish tank. (Hug was not in our custom, so this was more physical than we were used to.) Since then, I never rebelled because it became clear to me how significant my mom really was to me. And with this solid foundation of my family's support for me and my conviction that they would always be there for me, I was able to jump into a completely new life in the US, and eventually, Canada. I shudder to imagine what my life would have been like if it weren't for Hisano. (I think I would have been stuck in Japan, possibly living with my dad in his house, unable to achieve independence.) My mom has sadly passed away since. But I have precious memories with her thanks to Hisano.

Hisano is a wonderful person to talk to! She is full of bright energy, so even if you are having a down day and not wanting to learn anything new, you will still gain sunshine-like power from her. I do every time! Learning a new language is also learning about the new culture. Hisano is equipped to teach both, especially how  Americans tend to think and act with confidence. As you learn English from Hisano, you will gain an effective tool to communicate and act in the international world. May her teaching broaden the horizon of more Japanese people...!